Don’t be a victim of harassing debt collectors

As the U.S. continues to lick its economic wounds from the recession’s aftermath, millions of consumers are still faced with that ugly 4 letter word — DEBT. Nearly eight out of every ten Americans are in debt, i.e., they owe far more than they own. Debt collectors have created a multi-billion dollar industry preying upon the financial hardships of others.

While some collection companies are legitimate, many abuse the process daily by harassing debtors, calling multiple times a day, even on weekends, attempting to collect debts. These unscrupulous debt collectors live by the philosophy that if they harass you enough, at some point you’ll simply pay the debt just to get rid of the nuisance.

There are at least three (3) different avenues by which consumers can fight back against harassment and the never ending phone calls by debt collectors — The Telephone Consumer Protection Act (“TCPA“), the Fair Debt Collection Practices Act (“FDCPA”), and the Florida Consumer Collection Practices Act (“FCCPA”). Each of these, individually or together, when properly presented can result in huge damages in favor of consumers and against debt collectors.

In 1991 Congress passed the TCPA. Among other things, this Act restricts debt collectors from using an automated telephone dialing system (“robo-calling”) to place calls, or texts to a debtor’s cellular telephone without their consent. Since 1991, however, debt collectors have become more sophisticated, and as a result, new laws have been implemented with the assistance of the Federal Communications Commission (“FCC”), in order to combat the ever-evolving tactics debt collectors use to harass consumers daily. For example, Congress has enacted severe penalties for debt collection practices which allow consumers to collect between $500 and $1500 per collection call or text!

In a recent federal case, the court ordered a debt collector to pay a consumer $363,500 for robo-calling 727 times without express consent. In another case, the same federal court determined that the debt collector should pay $1500 per each phone call considered “willful and knowing.” In both of these cases, the consumer prevailed because they hired a knowledgeable attorney in order to assist them with their claims.

To add additional protection for consumers, a federal act called the FDCPA was enacted as a safeguard to punish debt collectors from overreaching their authority and to award those who are victimized by such acts with money in their pocket.

Although the FDCPA was established as a shield against unlawful conduct, most debt collectors ignore these rules. They figure that the benefit of receiving payment from those who don’t know their rights, outweighs the detriment from the few who actually stand up and fight back.

The FDCPA’s stronger Florida counterpart, the FCCPA, places heavier penalties against a debt collector and increases the amount of money an individual may receive for a collector’s violation when presented with a claim.

A federal court in central Florida recently awarded $22,000 in damages to a consumer for a creditor’s unlawful debt collection practices— $10,000 of which was additional punitive damages allowed under the FCCPA.

Some of the most common FDCPA and FCCPA violations debt collectors commit include:

If a consumer has been harassed by a debt collector, it is not unusual for an attorney to sue the collector under both the FDCPA and FCCPA. This strategy may result in a huge benefit to a Florida consumer by casting a wider net of remedies, under both state and federal law. In fact, many debts can be wiped away, along with deletion of negative credit information to resolve consumer claims under the FDCPA and FCCPA.

Claims raised under the TCPA, FDCPA, and FCCPA are just some of the ways in which The Arcia Law Firm can assist consumers obtain a huge recovery against over-reaching debt collectors.

Most importantly, when hiring The Arcia Law Firm to handle your claim, consumers are responsible for zero fees— that’s no money down, no money out of pocket.

Whether you have been the victim of unwanted telephone calls or texts, or seek assistance with understanding your rights as a consumer faced with harassing debt collection phone calls, our firm will be able to assist you.

The Arcia Law Firm is privileged to successfully represent dozens of consumers in our community against unethical and unscrupulous debt collectors. Contact the Arcia Law Firm at 954-437-9066 to schedule your Free Consultation Form to discuss your case in detail.

Our Firm guarantee is that each new client will meet with an attorney, not with a secretary or paralegal.  We welcome the opportunity to meet with you and evaluate your case free of charge.

Order your own dvd
and Fight for your home! 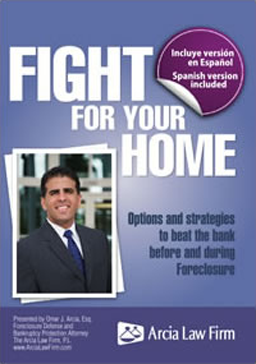 DO I NEED TO HIRE A LAWYER?​
Take our personalized 5 question quiz to find out!